I’ve started my next novel

It’s completely different from the one that is now in the publishing process, The Bones of the Earth. I plan to launch that one in late September.
Completing and getting close to publication of my first novel energized me. In July, I participated in the JulNoWriMo, the novel-writing month for the summer (based on the better-known NaNoMo, the National Novel Writing Month, which is every November). I learned that I really could write a complete, novel-length work of prose in 30 days.
The other thing that I learned was for that to work, I really had to have an outline—a plan for how to get from the premise of the book to the conclusion in a way that made sense and with a plot that didn’t have huge holes, or that wandered into dead ends.
I guess you could say that I was inspired. By the end of July, I had actually completed two novels! So I had no more excuses to put off completing another one. I took out the work that had been making me feel the most guilty about not finishing for so many years: it’s a biography, in novel form, of my late father-in-law. The story focuses on his experience in the Red Army during the Second World War.
I had started to write is as an adventure-war story. The story itself is quite thrilling: a college student gets drafted into the Red Army, gets wounded at Kyiv, returns to the fighting, gets captured by the Germans, manages to escape with the 12 men in his command and get them across occupied Ukraine, enters the resistance against the Nazis and then against the resurgent Communists, gets re-drafted into the Red Army and fights as an enlisted man from Estonia to Berlin. I had written probably 40,000 words in the story before I stopped it when the subject of the book passed away. That was over seven years ago. It’s sat on my shelf since, and while I’ve looked at it and done some work on it since, mostly checking facts, it’s bothered me that I have not been able to finish it.
On my vacation in early August, I worked out the outline. I guess it was a boost in confidence that allowed me to change the focus and the style of the story. I wrote out the outline while staying at the Hotel de la Paix in Lausanne, Switzerland. Now, I can say that I began writing the novel in the same hotel that hosted James Joyce, Scott Fitzgerald and other internationally known writers. 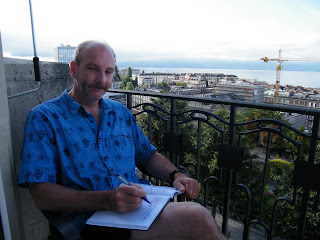 Me, working out the framework of my next novel on the balcony of my suite at the Hotel de la Paix, Lausanne, Switzerland. In the background, beyond the crane, is Lac Léman (Lake Geneva).
My plan now is to write or re-write at least 2000 words a day and finish a draft by the middle of October. I know that’s realistic. I have a lot of the book already written, but I need to re-write it for a new tone and style I’ve decided on.
I’m going to post more on this blog about my progress or any snags I run into. I’ll also Tweet about my progress @ScottTheWriter. Hope to write to you again soon!
Posted by Scott Bury at 9:57 AM