The master of the thriller, Frederick Lee Brooke, stepped boldly into a new genre with his fourth novel, Saving Raine. Written Words joins the blog tour with Excerpt 2 — but first, what's this book about?

It’s 2021, and personal drones are a fixture of daily life, but due to constant upheavals food is scarce. Rival militias, the terrorist group March22, and draconian restrictions on travel complicate the task for 19-year-old Matt Carney as he starts a harrowing road trip filled with deadly obstacles, including Predator drones raining down homeland security missiles, to save his girlfriend, Raine. 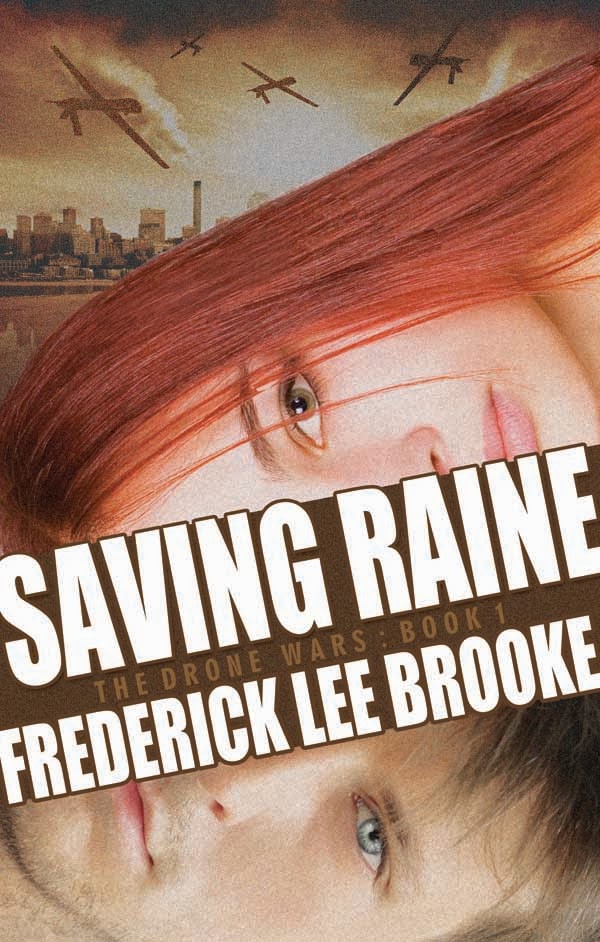 “Can I send out a couple of drones?” Benjy asked quietly. The captain gave a quick nod, his hand on the wheel, watching his instruments and the river at the same time. The mate stood on the bow, keeping watch.

Matt followed Benjy and watched him launch the Tornados. “One upriver, the other downriver,” Benjy said. “Just for the heck of it.”

The sounds of the engine were damped so low, you could hear the water slapping against the steel hull. The eerie quiet and steady breeze made it a pleasant journey. They were crossing the Mississippi. The river was only two miles wide here, but he felt a thousand miles closer to Raine already.

Matt felt a thrill once again at the memory of that bluebird he’d chanced to see this morning, that brilliant flash of blue. Suddenly he remembered the last time he’d seen a bluebird. It had happened the day he’d met Raine, while walking in that stretch of forest on the west side of Chicago. How could he have forgotten?
A few minutes later, when Benjy walked purposefully over to the captain to show him something, Matt followed, curious.

“What would this be?”

The captain studied the image of a vibration pattern for a few seconds, then gave a start. “Where is that Tornado?”

“Shit, why don’t I see it?” The captain wasn’t whispering now. He shoved the twin throttles forward, causing the engines to roar. The captain looked terrified. He stared intently out the window on his side, and Matt looked with him. Nothing but the breeze, the moon, and stars.

Then Matt spied it. A bow wave, some hundred yards to their right, heading straight toward them. He saw the wave, but no boat.

“Bow wave upriver,” the captain said. “They’ve got image cancellation. Invisible till they’re on top of you. Good thing your drone picked up the signature.”

“We’re not going to make it,” the captain said. The oncoming craft suddenly resolved into a fully visible behemoth of three barges lashed side-by-side. Their little car ferry was actually almost far enough across to narrowly miss being run down. Matt thought the captain might be overly pessimistic.

The middle of the third barge cut through the water some twenty yards upriver, heading straight for them. That barge had to be fifty feet wide. But they were running at full throttle. The Mylar net jumped in the water behind them, no longer covering the wake as they ran at maximum speed.

“Why don’t they stop?” Benjy cried.

“Couldn’t stop if they wanted to. Momentum,” the captain shouted.

Matt stood at the stern rail and watched as the towering bow of the oncoming barge rose over them. The starboard edge of the barge sliced through the water, almost upon them. By some miracle, a distance of three feet separated the steel prow of the barge from the rear fender of their craft as it hurtled into their wake. The cutting edge of the barge chewed up the Mylar net like tissue paper. The ferry bounced in the churning water like a rubber toy, but the captain maintained control as they sped away from the barge.

“Got any weapons?” the captain shouted. “Better break ’em out.”

The loss of the Mylar net made the wake light up in the water like a movie screen. Fish leapt from the water behind them. Their big silver bodies glistened in the spotlights from the barge. Then the spotlights locked on their boat. Matt ran to the car and jammed a clip into the AR-15.

When the first shots came, he was ready.

“Two shooters, one in the corner, the other fifty yards up,” Benjy reported. He was studying the action on his Jetlink, crouched on the floor. All of a sudden the windows of the main cabin exploded, sending glass flying.

Matt let out a burst at the man in the corner. The shooting stopped from that position. Either the man had taken cover, or he was dead. The soldiers stood up there with no cover at all. Arrogant bastards. He focused on the second man and let out a second burst. Searching in the scope, he saw no more faces. Over the roar of the engine he heard Benjy’s voice.

“You got both, Matt, but the captain’s hit! Damn it, I need you in here now!”

Who is Frederick Lee Brooke?

Frederick Lee Brooke launched the Annie Ogden Mystery Series in 2011 with Doing Max Vinyl and following with Zombie Candy in 2012, a book that is neither about zombies nor sweets. The third mystery in the series, Collateral Damage, appeared in 2013. Saving Raine, the first book in Fred’s entirely new series, The Drone Wars, appeared in December, 2013.

A resident of Switzerland, Fred has worked as a teacher, language school manager and school owner. He has three boys and two cats and recently had to learn how to operate both washing machine and dryer. He makes frequent trips back to his native Chicago.

When not writing or doing the washing, Fred can be found walking along the banks of the Rhine River, sitting in a local cafe, or visiting all the local pubs in search of his lost umbrella.

Frederick Brooke is a member of Best-Selling Reads and Independent Authors International.