Apple’s new version of iPhoto software includes "Photocasting," a simple way to allow people to share digital photographs over the Internet. And iRemember is a “digital scrapbooking” application that works with iPhoto, making it simple to assemble digital photos into albums or “scrapbooks” and share them via e-mail.
To date, both applications are aimed at individual consumers, but professional communicators can see obvious business, marketing communication applications.
Are you using either application, or a reasonable facsimile, in your professional communications? Tell me how your solution works, using the Comments boxes below.
Posted by Scott Bury at 3:10 AM No comments:

Celebrities speak out against media anorexia 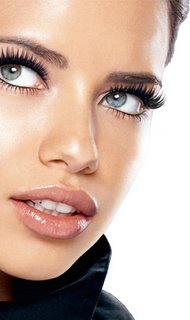 Nice eyeliner, but she can’t even carry off a single line of dialogue in a commercial.

I am encouraged by two celebrities who have made very public criticisms of the kind of feminine anorexia that’s encouraged by the media, especially the fashion media.
J.K. Rowling, author of the Harry Potter novels, got a lot of attention when she used her own web site to rail against rail-thin models whose only purpose, she says, seems to be to promote overpriced handbags and “rat-like” dogs.
And punkess Pink’s song, Stupid Girls, is another rant against the thin image promoted by the fashion industry—a degree of thinness that is only possible through extremely unhealthy lifestyle choices.
I’ve been railing, myself, against this image and this idea that is so destructive to women’s self-esteem and health. With such powerful spokeswomen as Rowling and Pink, maybe we’ll start to see the pendulum swing away from the slavish emulation of empty-headed Paris Hilton.
And have you seen the latest TV ads for Maybelline's eyelash makeup? It features yet another typical fashion model: unnaturally, unhealthily thin with collagen-injected lips. The advertiser gives her one line - one line! of dialogue, and she can't even pull that off.
Posted by Scott Bury at 3:07 AM No comments:

The real goods on separation

Two of the most prominent Quebec sovereignist playwrights, Michel Tremblay and Robert Lepage, have both renounced or questioned the value of Quebec separation. It’s been all over the Canadian media.
Finally, proof of the true nature of the “Quebec sovereignist movement”: it was bogus from the beginning. They never really meant it—the whole thing was just a lot of noise to get special treatment. It’s the same idea as a child threatening to leave the game and take her ball if she doesn’t get her way.
Ironically, Tremblay is the most produced playwright in Canada. He actually turned down the Order of Canada in 1990 because of his separatism—but accepted a Governor General’s Award in 1999.
I wonder how much financial support and grants Tremblay accepted as an artist from Canada while openly espousing separatism?
Posted by Scott Bury at 3:07 AM No comments:

The letters you write can get you into trouble. Take the Social Sciences and Humanities Research Council, which funds scientific research: they wrote that they can’t tell whether the theory of evolution is correct.

The SSHRC rejected a funding application by McGill University Professor Brian Alters, who had asked for $40,000 to find out if the increasing popularity of the “intelligent design” idea about the origins of life was “eroding acceptance of the theory of evolution.”

The SSHRC turned down the application because “the proposition did not adequately substantiate the premise that the popularizing of Intelligent Design Theory had detrimental effects on Canadian students, teaches, parents and policymakers,” its letter read.

But what really got them into trouble was the next sentence: “Nor did the committee considerer that there was adequate justification for the assumption in the proposal that the theory of Evolution, and not Intelligent Design theory, was correct.”

Professor Alters read the letter at a public lecture in Montreal at the end of March, garnering gasps from the audience and headlines in newspapers.

The professor has scored a lot of points by repeating the line about inadequate justification for the assumption of evolution. And rightly so: evolution is proven. While there is legitimate scientific debate about its mechanics, and while I will admit that the theory has become unassailable orthodoxy in scientific circles, Intelligent Design is an attempt to to put a scientific façade on creationism. It’s supported, so far as I can tell, only by those who confuse willful ignorance with religious faith.

Maybe Professor Alters’ application was inadequate: if I were marking a student’s essay on comparing the theories of evolution and intelligent design, I’d look for the same rigour applied to both arguments. And evolution would win, obviously. So maybe what the Council is saying is that Prof. Alters didn’t fill this part of the application out right.

What does this controversy mean? It means that anyone writing a letter on behalf of an organization—university, federal agency, or business—should have it checked by a communications professional before sealing the envelope.
Posted by Scott Bury at 10:37 AM No comments: