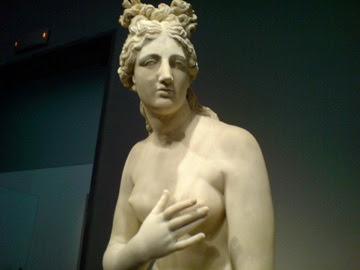 Close-up of sculpture of Aphrodite, with Eros, by Praxiteles, in the National Archaeological Museum in Athens, Greece

The best thing about this unit is its screen: big and bright with an attractive visual interface. The size of the screen allows Sony Ericsson to make the numbers big, easily legible for someone of a certain age, like me.

The worst thing about the K790 is the size of the buttons---even smaller than with most other cell phones I’ve owned or used, which were small enough. These seemed shorter than usual, making it very difficult to be certain without looking that I was pressing the right one. Even while looking at the keypad, it’s hard to tell, sometimes, which button you’re pressing down until its icons shows up on th screen. 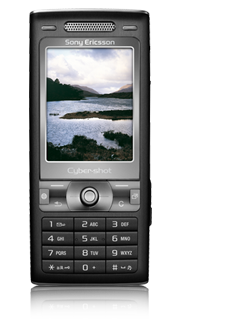 The K790 is really more of a cell phone with a decent digital camera than a good digital camera with a phone added --- but depending on your own photographic needs, it may be both.

It’s a GSM phone, (Global System for Mobile communication standard), which means that it has a SIM card that carries your identify information, contacts and other personalized data, and it can roam across national boundaries. It even works in Europe (I tried it!). It has such features as text messaging and Web browsing, among others.

A slightly newer model, K800, won a GSM award as the “best camera phone” from the GSM Association in 2007.
Its form-factor --- what it looks like --- is a flat rectangle, often referred to as the “Hershey bar format” by those in the trade. Hold it upright and it looks like a cell phone; turn it sideways and it’s a camera, with a shutter button on the top (what used to be the side), under your right index finger, and a zoom control under your left.

As a phone, it has a lot of features: camera, games, MP-3 player, text messaging, contact list, web surfing ability, email functions, a video player and a photo “slide show” player. It even has a built-in radio, like my slightly older and much cheaper Nokia flip-phone. It even comes with a hands-free, although not wireless, headset with microphone. I have to admit, though, that my Nokia seems to have better radio reception, and a simpler interface for tuning and volume control. The K790 is also Bluetooth-ready.

The sound is good, whether you’re using the built-in speaker and microphone or the headset. The main drawback to the phone half of the device is the keypad: the buttons are a lot smaller than those on most cell phones (which are already too small for my fingers!). However, whether that’s a problem seems to be more about your perception: I didn’t actually make many typing errors when entering a phone number, although I did find it frustrating to enter text: the internal timing is too quick, so that when I entered “r” when I wanted to enter “s,” the phone quickly moved to the next character before I could hit the 7 key again. And backing up meant starting that name all over again!

It’s a pretty good unit for the amateur enthusiast or holiday snapshotter. The back of the phone has a lens cover that you slide down to activate the camera mode. It has an auto-focus and an automatic flash, as well as some limited options to adjust the white-point balance for bright sunlight, cloudy conditions or fluorescent lighting.
Waking the camera up sometimes takes longer than you want it to, especially in “snapshot” situations where you want to be able to whip it out and shoot a fleeting moment. I often have to open and close the lens cover two or three times to “wake” the camera.

With a 3 megapixel image size, it’s definitely not a professional level camera, or even enough for the serious prosumer or amateur enthusiast. On the other hand, it’s a good mid-range camera, and a good picture captured with the K790 can make a good 8 x 10 print. 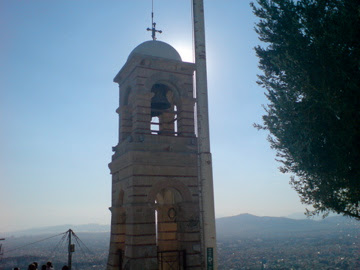 Above is an example of an outdoor shot: taken at the chapel of St. Nicolas at the top of Likavittos Hill in the middle of Athens, Greece. Under these conditions - lots of light, clear subjects - the camera performs quite well.

However, at extreme zoom, images are poor. Here is a shot taken of the capital of the Temple of Hephaestus in the Greek Agora in Athens. 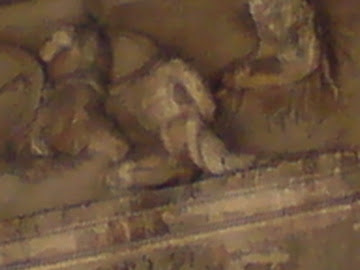 As you can see, the detail gets broken up and looks very blocky. Optical zoom gives much better results.

As stated, the viewing screen, which is also the only viewfinder you have, is a good size: 2 inches diagonally, approaching the size of the screen on the Kodak EasyShare v610 reviewed last year (URL). It’s bright, and the initial menu is cute, with fairly intuitive icons.

There’s a tiny “joystick” to help you move through the menu, and you can press it down to select it. It worked reliably when I tested it.

Other buttons and sub-menus can be a little confusing. Sony has added a “go back” button, akin to the Back button in a Web browser – except that this one is hardware.

Other buttons are context-sensitive --- their function depends on the use you’re getting out of the camera. For example, the Select button is at the bottom right; but if you’re using the phone part, you’re holding the phone upright --- it’s taller than wide. When you’re using it as a camera, it’s wider than tall. In either case, the Select button is at the bottom right of the screen, which means it “moves” --- or the function moves from one button to another depending on the mode you’re using. I was always double-checking that I was pressing the right button.

Memory:
The K790 has both built-in storage and a slot for an M2 memory card. Those are really tiny chips, 1 by 1.5 centimetres --- smaller than my thumbnail. Really. Don’t try to change those on the beach, because you’ll lose them.

Features
• Auto focus – sometimes didn’t work on the first shot, requiring a second attempt
• 16 x digital zoom – not bad, but of course not as good as optical zoom.
• image stabilization -- essential, as shaking is always a problem with such a small device
• xenon flash with three modes: automatic, off or red-eye reduction – works well, but you can’t turn it on at will so you can use the flash to fill in backlighting, although you can add more light by adjusting the ISO setting
• BestPic – takes 9 shots in quick sequence, allows you to pick the best one, then deletes the rest. This is great for action shots, but it uses a lot of memory. You have to be quick to pick the best, or you’ll quickly fill up your memory on a busy day of shooting
• Video record – decidedly low-resolution, choppy video, far worse than on any other digital camera I’ve ever used before
• BlueTooth and PictBridge for easy printing on enabled devices – sounds good, but I didn’t test these features.

What I think
The pictures are very good for my uses: on-screen slide shows, saving to DVD.
However, the auto focus does take a few seconds. There’s usually a delay in shooting a picture, which can frustrate small children who have to pose.

Turning the flash on and off is a little slow, too, taking several steps through the menus. A single button, as many other cameras have, is clearly preferable.

Another confusing aspect was the memory. Although there were two memory banks --- built-in and M2 --- the camera moved seamlessly between them when it was playing back pictures, but asked me to select where to save when taking new ones. And the menu doesn’t make it clear whether you’ve selected built-in memory or the memory stick.

As said, the videos aren’t very good at all. The resolution is too low, the capture speed jumpy, and the images themselves look like they’re made of blocks, or like a still shot with far too little light.

All in all, I think that the Sony Ericsson K790 is a great phone with a good camera in it. It’ll be great for snapping vacation shots, and it carries easily. Its resolution is a bit low for professional communicators, but it may be just right for the serious amateur or the vacationer who wants good shots for the home slide show.

Here are some more examples of the camera's capabilities: 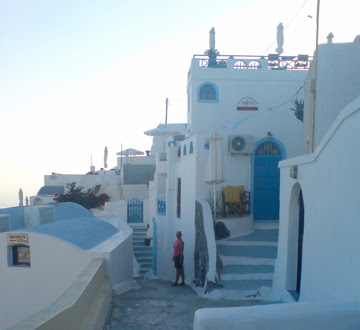 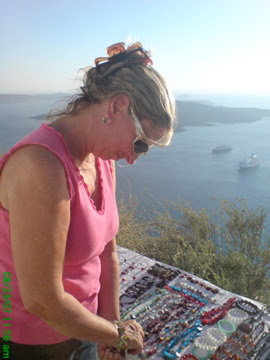 Looking at a street vendor's wares on Santorini Island, Greece 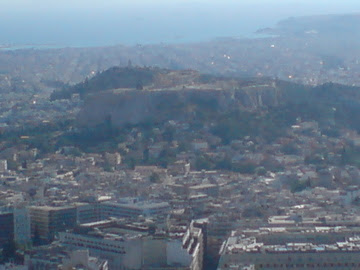 From Likavittos Hill again, looking past the Acropolis to Piraeus and the Aegean Sea. You can see how the image breaks up at extreme zoom.

Again, under ideal conditions, with lots of light and without an extreme zoom, you can get a nice snapshot --- in this case, the Acropolis in Athens, Greece. Notice the scaffolding where the Greek government is attempting to restore this monument --- after, what, 2,500 years of neglect?
Posted by Scott Bury at 1:03 AM No comments:

Today, November 12, I walked into a Shoppers Drug Mart and heard an awful version of “Walkin’ in a Winter Wonderland” on their background music system. (I suspect that “Muzak” is a trademarked name.)

I love Christmas: the togetherness, the real music. But while stores and malls love to play music to encourage people to buy stuff, their selection is extremely limited. They don’t dare play any overtly religious Christmas carols for fear of offending someone.

So the selection is limited to a small selection of the most awful, cheesy or maudlin songs: “Winter Wonderland,” “Sleigh Ride,” “Silver Bells,” “The Christmas Song (Chestnuts Roasting on an Open Fire)” and, worst of all, “Jingle Bell Rock.”
No matter which store or mall you walk into, you’ll hear the same songs. Different versions, different singers, different arrangement, but it’s the same bad songs.

Come on, retailers: give us a break. Don’t subject us to over a month of awful songs played endlessly. How about a little more variety? Or maybe just some silence?
Posted by Scott Bury at 4:49 PM No comments: