I’m it, twice! I was tagged by two different bloggers for “My Writing Process” blog tour: Mohana Rajakumar and Autumn Birt.

In this tour, I have to answer four questions about what, why and how I write, then link to the bloggers that tagged me and tag two (or three, depending on whom you ask) more authors in turn.

I have tagged Fred Brooke, Gary Henry and Terry Tyler to follow me.

Now for the questions.

The project closest to completion is a memoir in novel form, tentatively titled Broken Boots. It’s the true story of my father-in-law, who was drafted into the Red Army in 1941, just before Germany invaded the USSR. The manuscript is now with my capable editor.

At the same time, I’ve been working sporadically on another work that crosses genre boundaries, Dark Clouds. I published the first chapter, “The Mandrake Ruse,” as a free short story a couple of years ago, and have posted other random chapters on various blogs.

I like to combine elements of various genres. Broken Boots combines biography with military action thriller—the subject has, alas, passed away and so I have to fill in some of the details with impersonal research about the Eastern Front of the Second World War, and my own imagination. But it’s still true to the story. 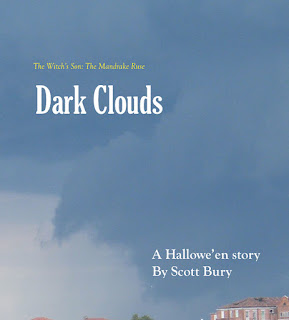 Dark Clouds breaks the rules of the urban paranormal genre by mixing it thoroughly with the high-tech spy thriller. If you’ve read the first chapter (just click the tab under “Free stories and chapters” in the right-hand column), you’ll know that it’s the story of the Witch Queen, her immune-to-magic son and his wife. The plot from there will involve international spies, the oil industry and a political conspiracy.

I don’t remember whether it was Samuel R. Delany or JRR Tolkien who said that he wrote stories he wanted to read, but could not find. I wanted to write a story about dragons that showed how they represented the deepest and most powerful expression of the natural environment, but could not find any. I really wanted to get away from the fantasy trope about kings and princesses.

Parts of stories seem to pop into my head, actually: beginnings, endings, scenes in the middle. Extending those ideas into a complete narrative, with a beginning middle, end, believable and interesting characters and a good style, as well as enough fact to keep it all hanging together, is where the hard work comes in. 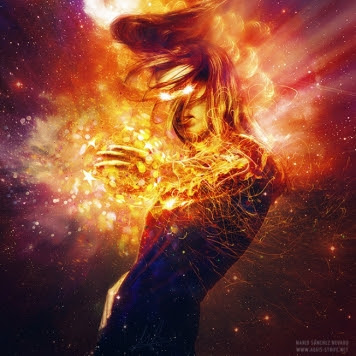 It varies. For example, one day I heard or read a challenge to come up with the scariest opening for a scary story for Hallowe’en. My first thought was “He always knew when his mother was about to arrive.” Then I thought, why is his mother so scary? For some people, it might be the thought of having to clean up the house before she gets there, but that wouldn’t make much of a Hallowe’en story. So, what’s scary about Mom? How about if she’s the queen of all witches? Then I thought, to make it more interesting on a personal level, what if Mom the Witch Queen doesn’t like her son’s wife? Maybe they’re both witches — enemies on a metaphysical plane as well as rivals for the hero’s attention.

I don’t know where the next element for the story came from, but I decided to make the hero, Matt, immune to any form of magic.

Once I have these basic elements, the next step is to create a story arc — where the story will go, in the broadest terms. From there, I can create an outline, and break that into chapters. That will tell me what kind of supporting characters I have to have, and also whether I need to do any research. I have to have some kind of direction before I can start filling in details.

I always write from an outline. I even outline chapters, at least in my mind. But it’s always better to have it on paper. That way, I don’t forget things.

That’s not to say the outline cannot change. As I write the story, I’ll realize there are details and back-stories to create. I may have an inspiration that will spin the tale in a new direction. But I still have to reconcile the outline so that the story makes sense.

I usually rewrite chapters two or three times, and then rewrite the whole book at least twice. That’s before I get to the editing stage. I like to have at least two people besides myself edit a book, and at least one of them has to have some kind of professional background in editing and/or publishing.

It takes a long time, but I feel it’s important to have a quality product for my audience.

Thanks again to Mohana and Autumn!

Born and raised in Chicago, Fred has lived in Illinois, Massachusetts, Montana, France and Germany and now lives in Switzerland.

Terry Tyler is the author of six books, including You Wish, which I reviewed. Her latest is Kings and Queens. Living in the UK, she has a blog about writing and also writes about self-publishing for the UK Arts Directory.

Gary Henry, blogger at Honest Indie Reviews and IndieUniverse, and author of AmericanGoddesses and two collections of stories. He is also managing editor of a glossy monthly print magazine and an avid runner.