The update is actually titled The Ontario Curriculum, Grades 1–8: Health and Physical Education. There is a separate curriculum for high school, grades 9 to 12. It covers much more than sex, in fact, all forms of health, including safety, physical activity and hygiene.

The sexual component elicited opposition from the usual groups. The most prominent groups in this opposition use the Big Lie strategy to get more attention and rope uninformed people into joining their side.

For example, Charles McVety of the Institute for Canadian Values call the curriculum “nothing more than an indoctrination vehicle to teach children a new way of thinking about gender.”

Campaign Life—whose main goal is to stop abortion—is worried about teaching grade 1 students the proper names of body parts. This is what it says on its website as a problem with the curriculum, which is not all that different from the draft brought out in 2010:

“Below are some shocking excerpts from the 2010 curriculum that the Education Ministry had posted online…Graphic lesson on sexual body parts including ‘penis’, ‘testicles’, ‘vagina’, ‘vulva’ and more.”

This is what the curriculum actually says:

Specific expectationsC1. Understanding Health ConceptsBy the end of Grade 1, students will: …Human Development and Sexual HealthC1.3 identify body parts, including genitalia (e.g., penis, testicles, vagina, vulva), using correct terminology [PS]Teacher prompt: “We talk about all body parts with respect. Why is it important to know about your own body, and use correct names for the parts of your body?”Student: “All parts of my body are a part of me, and I need to know how to take care of and talk about my own body. If I’m urt or need help, and I know the right words, other people will know what I’m talking about.”

I don’t know about you, but I don’t see a problem with that. And “penis” and “vagina” are words we can hear regularly on prime-time TV today. 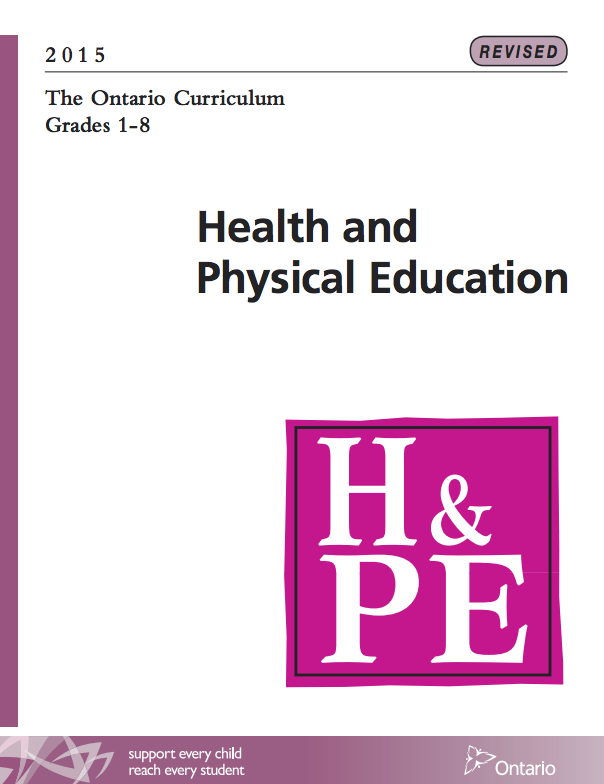 Campaign Life are also concerned that the curriculum

“Will normalize homosexual family structures and homosexual ‘marriage’ in the minds of 8-year-olds, without regard for the religious/moral beliefs of families.”

This is what the curriculum actually says about homosexual relationships for grade 3 students, who are 8 or 9 years old:

By the end of Grade 3, students will: …C1.3 identify the characteristics of health relationships (e.g. accepting differences, being inclusive, communicating openly, listening, showing mutual respect and caring, being honest) and describe ways of overcoming challenges (e.g. bullying, exclusion, peer pressure, abuse) in a relationship [IS]Teacher prompt: “Consider different types of relationships — with friends, siblings, parents, other adults — and think about the kinds of behavior that help to make those relationships healthier. What can you do if you are having problems with a relationship?”

Importantly, in Grade 1, the curriculum also aims to teach kids this concept:

demonstrate the ability to recognize caring behaviours (e.g., listening with respect, giving positive reinforcement, being helpful) and exploitive behaviours (e.g., inappropriate touching, verbal or physical abuse, bullying), and describe the feelings associated with each [IS]

Let’s look at the curriculum:

will teach the disputed theory of ‘gender identity’ as if it were fact. This is the notion that whether you're a boy or a girl does not necessarily relate to your physical anatomy. It is merely a ‘social construct’. Gender is ‘fluid’ according to this theory, and any little boy can decide that he is actually a girl, if that's the way he feels in his mind, or vice-versa.

Note: The potential for causing serious sexual confusion in the minds of children is very real with this teaching.”


Of course, Campaign Life does not point out that there is no evidence for the theory that teaching children the theory of fluid gender identity harms them in any way.

Another thing that this organizations do not point out in their protests against the curriculum is their own agenda. They’re very conservative, stridently anti-gay and against any sexual content in any education. In fact, reading their material, I get the strong sense they’d be happier if no one ever talked about sex, ever.

Another big lie: no parents were consulted on the development of the new curriculum. In fact, consultations with parents, students, teachers, faculties of education, universities, colleges and other groups started in 2007. Granted, most of that was prior to the 2010 draft, but there isn’t much difference. And there have been consultations since.

Parents have had a lot of opportunity to weigh in on the issue. And in the meantime, the world has moved on and become even more sexually explicit.

Don’t worry. They already know how. And so do you, Lilley.

Have a problem with that, Lilley?

Big lies. Expect the anti-sex brigade to keep repeating them, because we all know the Big Lie strategy works.

Even in this sexually explicit age, we’re still squeamish about sex.

“I know sex is either boring or dirty.”

Sex’s dirtiness and the shame imposed on my generation around sex — and earlier generations, too — fuels the titillation, fascination and explicitness over sex. Despite the sexual revolution of decades past, we’re still squeamish about it. Especially religious communities, who cannot get away from telling people about the kind of sex they should have.

By the way, as a parent, I really resent groups like the Institute of Canadian Values presuming to dictate to my kids whom they can marry. As far as values go, I think these are Canadian values: accepting differences, being inclusive, communicating openly, listening, showing mutual respect and caring, being honest. Where did I see those? Oh, yes — in the Ontario Health and Physical Education Curriculum for Grade 1.

What age is appropriate?

With every other topic, we teach people information before they start the activity, so they know what to expect and can take the right steps to protect themselves against inadvertent harm. We teach kids safe behavior near water before we teach them to swim. We teach teens the rules of the road in a classroom before we let them get behind the wheel of a car. So why should we not teach facts about sex before they’re of an age to be sexually active?

I remember when my kids came home from their first sex-education classes, in grade 3 or 4 — I can’t remember, offhand, which it was. Their reaction? “Gross!”

No danger that they were going to indulge in premature sexual activity in school.

The biggest lie is that, without sexual education in school, parents can “protect” their children against harm by keeping ideas and expressions about sex away from them. The reality is that our society is awash in sexual messages. The biggest movie is Fifty Shades of Gray, based on the book that broke all kinds of sales records of its own. Every time I go to the grocery store, the magazines at the check-outs invariably bear at least one headline about having “mind-blowing sex.”

I don’t think children are harmed by facts.

They’re harmed when facts are hidden from them. For centuries, abusers have gotten away with sexually exploiting children partly because the shame that their victims felt prevented them from talking about it, from reporting it.

If we can talk openly and honestly about sex, without shame, the same way we talk about any other health topic — the way we talk about healthy food, for example — then maybe the next generation will have fewer sexual problems and healthier lives.

What do you think?